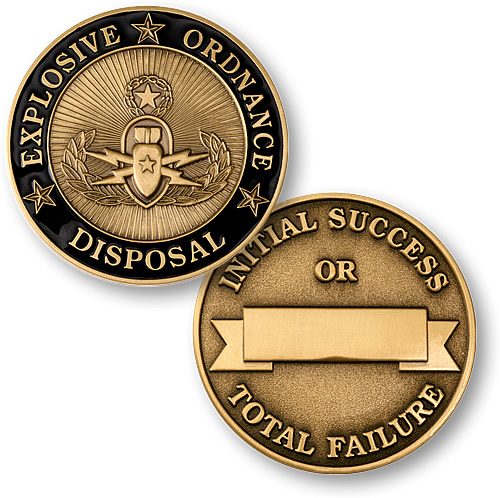 Additionally, EOD presents classes on ordnance recognition, bomb search, bomb threat and reporting procedures to military, civilian, and federal authorities. Lastly, EOD is capable of rapidly deploying as part of a Weapon of Mass Destruction Task Force to defeat weapons of mass destruction directed against the United States and its interests. This coin honors those in the military who serve on the EOD and provide their critically valuable service.  The obverse displays the symbol of the EOD with the words, "Explosive Ordnance Disposal" boldly around the rim, accented by three stars against an enamel background. The reverse has an area for engraving, surrounded by the words, "Initial Success Or Total Failure". This coin is minted in brass, given an antique finish, and imbued with a durable enamel accent.

Back to: Army Coins