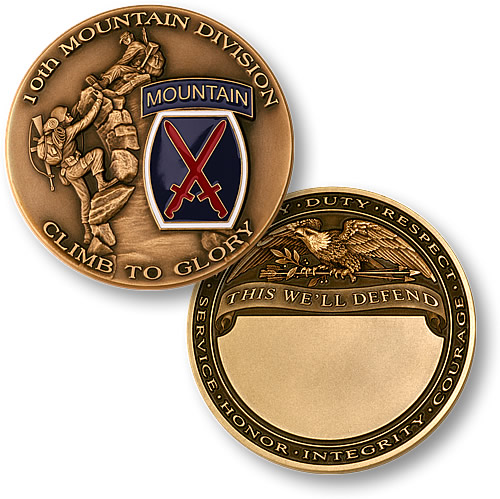 The development of a specialized unit began before the United States entered World War II.  In 1940 the War Department began working with the American Alpine Club and the National Ski Patrol Committee of the National Ski Association to develop equipment and training for winter and mountain warfare.  The 87th Mountain Infantry Regiment was activated at Fort Lewis, Washington on November 15, 1941, drawing its initial members from men already in the Army who had previous ski and mountaineering experience. Thereafter the National Ski Patrol recruited volunteers for the unit, under a contract with the War Department. In 1942 and 1943 additional regiments that became part of the division were activated.

The unit saw its first combat in Italy.  Elements of the division began arriving in Italy in late December 1944, and after a brief training period entered combat, January 8, 1945, near Cutigliano and Orsigna.  The unit made concerted attacks on the Monte Della Torraccia-Mount Belvedere sector and the peaks were cleared after just several days of heavy fighting.  In early March the division fought its way north of Canolle and moving to within 15 miles (24 km) of Bologna.  Maintaining defensive positions for the next three weeks, the division jumped off again in April, captured Mongiorgio, April 20, and entered the Po Valley, seizing the strategic points Pradalbino and Bomporto.  The 10th crossed the Po River on April 23, reaching Verona April 25, and ran into heavy opposition at Torbole and Nago.  After an amphibious crossing of Lake Garda, it secured Gargnano and Porto di Tremosine, April 30, as German resistance in Italy ended.
This coin is minted in honor of the 10th Mountain Division and salutes the valor of all who have served in it. Struck in brass, this coin is minted through a "splash" process in which a thicker blank and higher relief dies contribute to form a coin with exceptionally high detail.  The coin is given an antique bronze patina, then the emblem of the 10th Mountain Division is carefully rendered in a baked enamel finish. The reverse has an area specially designed for engraving with a personal message.


This coin fits in a 1.8" Medallion Plate Cover

See realted products below to view the Medallion Plate Cover with this coin.
Back to: Army Coins