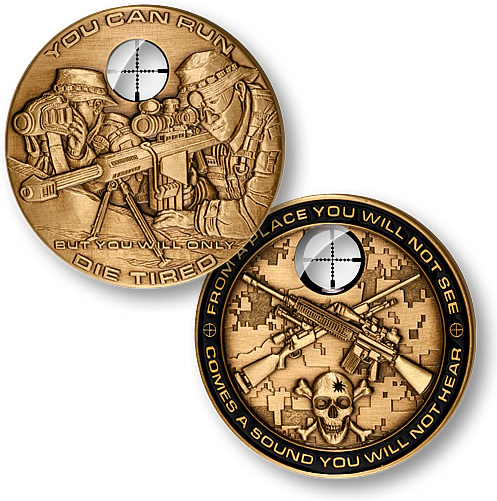 A sniper is an individual, usually a soldier or law enforcement agent, who specializes in shooting targets with modified rifles from very long distances, usually from a concealed location. Most are skilled in carrying out stealth and camouflage tactics on a battlefield zone. Military snipers are also adept at carrying out methods of infiltration, reconnaissance, and observation techniques.
A military sniper's primary function in warfare is to provide detailed reconnaissance from a concealed position and, if necessary, to reduce the enemy's fighting ability by striking at a small number of high value targets, especially officers, communications and other personnel. Typical sniper missions include reconnaissance and surveillance, target marking for air-strikes, counter-sniper, killing enemy commanders, selecting targets of opportunity, and even anti-materiel tasks (destruction of military equipment), which tend to require use of rifles in the larger calibers such as the .50 BMG. Snipers have of late been increasingly demonstrated as useful by US and UK forces in the recent Middle East campaigns in fire support roles to cover the movement of infantry, especially in urban areas.
This coin is a tribute to snipers engaged with the military or with law enforcement. Minted in a proprietary brass alloy, this coin is struck through a special process called "splash minting" which allows for much higher relief and detail and results in a coin that is thicker and heavier than one pressed with a traditional collar die. The coin is then given an antique bronze finish, and provided with a black enamel highlight on the reverse. Additionally, a hole is precision-drilled through the coin and a rifle scope eyepiece replica with crosshairs is installed, making this a very unique coin.

Click to view this coin in the Medallion Plate Cover

Back to: New & Best Selling Coins