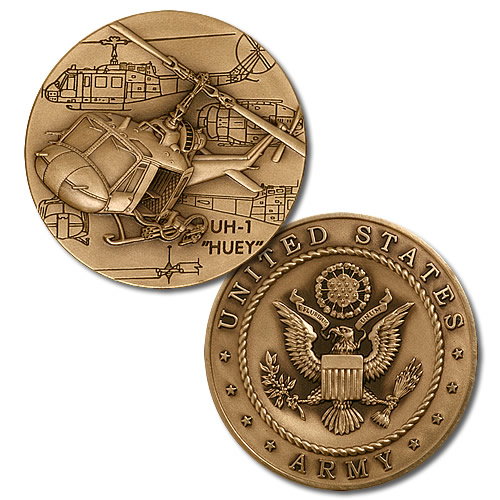 1  3/4" Diameter.
The Huey helicopter is the most successful rotary-wing aircraft in aviation history, with over 16,000 being produced over a five-decade span, used by all five branches of United States forces, and by hundreds of civilian agencies.  The Huey has been used for almost every mission:  troop transport, gunship, airborne battlefield command and control, troop insertion/extraction, medical evacuation, and search and rescue.

Matching its namesake, the Huey Helicopter coin is bold and memorable, capturing the Huey as a lethal gunship wreaking havoc on the Viet Cong. It salutes all courageous warriors who served with pride for over 50 years to preserve freedom or to engage the enemy in combat.

The Huey was enormously successful because of its ideal mix of cabin room, speed, lifting capacity, ruggedness, and service reliability. The HU-1A had an 850-shaft-horsepower(shp) gas turbine engine and was configured for six seats or two stretchers. The HU-1B increased power to 960shp and was configured for eight passengers or three stretchers. With the addition of a 1,000-shp engine, the HU-1C came into its role as the dominant gunship in Vietnam. The UH-1D further increased horsepower up to either 1100 shp or 1400 shp.  A distinguishing characteristic of that model was the larger cabin, with larger cargo doors and twin cabin windows on each side.  The UH-1D was redesigned to carry up to twelve troops, plus a crew of two. A twin-turbine model, the UH-1N, was later developed, and remains in use with the US Air Force, US Navy, and the US Marine Corps, and well as with more than 60 foreign governments.

Displaying incredible detail, the Huey Helicopter coin shows the “B” Model Huey Gunship in attack mode, with profiles of the “D” model in the background. It is minted in a tough brass alloy with a bronze antique finish. The reverse has the seal of the US Army.
This coin fits in a 1.8" Medallion Plate Cover
Click this Image to view the Medallion Plate Cover with this coin
Back to: Army Coins