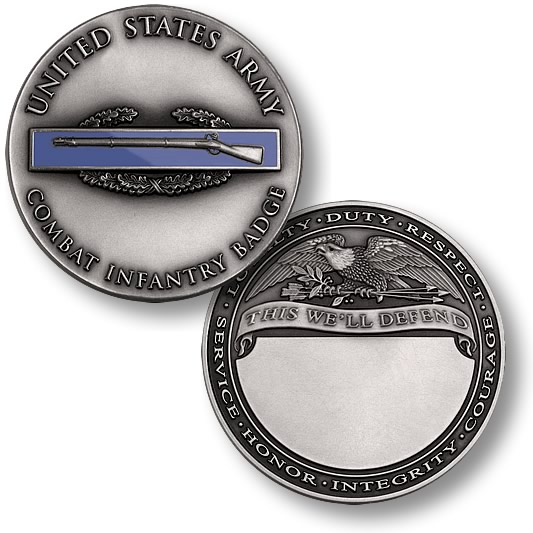 Those who carry this coin can produce it to show that they have been at the front lines defending American freedom and liberty in every conflict around the world since the Second World War.

The infantry is the main land combat force and core fighting strength of the Army - and an Infantryman’s job is to engage the enemy on land in defense of the United States and liberty. Recognizing the enormous value of the soldiers who risk their lives to take fire while securing and holding strategic objectives, the War Department established The Combat Infantryman Badge (CIB, better known informally as the Combat Infantry Badge) in 1943.

Those who wear the Combat Infantry Badge have directly encountered an enemy force. The CIB is awarded to infantry or Special Forces soldiers up to the rank of Colonel who have satisfactorily performed their duty while assigned as a member of an infantry/Special Forces unit, brigade or smaller when the unit was engaged in active ground combat. The policy was expanded in 1967 to permit award to Command Sergeants Major of infantry battalions or brigades. Since 2005, Special Forces Medical Sergeants may opt for a Combat Infantryman badge in lieu of a Combat Medical Badge.

Lieutenant General Lesley J. McNair, the Army Ground Forces commanding general in 1943, advocated the establishment of the Combat Infantryman Badge, recommending that it be called the "fighter badge." With the goal of improving morale and enhancing the prestige of the "Queen of Battle," Secretary of War Henry Stinson said at the time, "It is high time we recognize in a personal way the skill and heroism of the American infantry."

The obverse displays the design of the medal. The bar is blue, which is the color associated with Infantry. The musket is adapted from the Infantry insignia of branch and represents the first official U.S. shoulder arm, the 1795 model Springfield Arsenal musket. The oak symbolizes steadfastness, strength and loyalty. The reverse features an area suitable for engraving, as well as the Army motto, “This We’ll Defend”.

Minted in brass, using a special "splash-minting" process and provided an antique nickel finish, this Army Infantry challenge coin authentically reproduces in enamel the colors of the Combat Infantry Badge.


This coin fits in a 1.8" Medallion Plate Cover

Back to: Army Coins